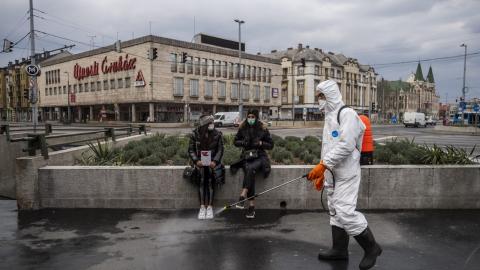 Rights groups warn that legislation submitted to the Hungarian parliament, giving the government of Viktor Orban unprecedented power of decree in the fight against COVID-19, would have a "chilling effect" on independent media in the country.

The 'Bill on Protection against Coronavirus' was submitted by Orban's government with the justification that it must be free to act without consulting parliament to confront a virus that has so far, officially, infected at least 261 people in Hungary.

The bill submitted last week amends rules under a state of emergency to give the government the power to rule by decree and suspend any existing law. It would permanently amend the criminal law to introduce punishment of one to five years in prison for anyone convicted of spreading "falsehood" or "distorted truth" deemed to obstruct efforts to combat the pandemic.

No elections or referenda can be held for the duration of the state of emergency and only the government or a two-thirds majority in parliament can lift it. Orban's right-wing Fidesz party holds such a supermajority.

The Hungarian Civil Liberties Union, HCLU, an NGO, warned of a devastating effect on Hungarian media after years of Fidesz rule during which right groups say the government has dismantled media freedoms and pluralism.

"Once the legislation enters into force, it could have a chilling effect, and its timing and social context could lead to self-censorship among journalists," the group said.

The way the bill is worded means someone could be prosecuted for 'obstructing' any number of government measures - from healthcare to education, border control and the economy - justified by the fight against COVID-19.

HCLU cautioned in particular that the term 'distorted' could...

Presidents Rumen Radev and Marcelo Rebelo de Sousa: Under Conditions of Crisis, Solidarity Should not Remain only in Words
PSD sends to Senate proposals regarding suspension of credit payments and capping prices for food

Region Voices Solidarity With Quake-Hit Croatian Capital
Plan of measures announced by Gov't seems made to save banks, multinationals, not SMEs or population (transporters)