Kosovo Mulls its Choices After Fall of Kurti Govt 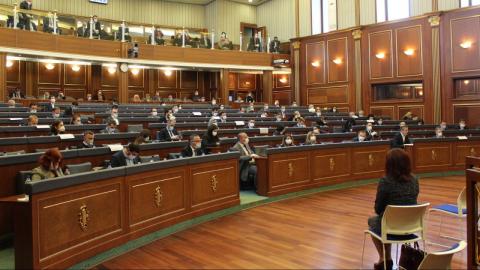 The overthrow of the Kosovo government under Albin Kurti on Wednesday night has created a fluid political situation, similar to that after the last election, creating the need for the formation of a new government, without excluding the possibility of new elections.

Under the constitution, the government is now deemed "dismissed" and President Hashim Thaci can dissolve the Assembly if he wishes and call the new election in 45 days.

But, Lulzim Peci, director of the Kosovar Institute for Policy Research and Development, KIPRED, a think tank, insists that "there is no vacuum in terms of executive power", as the old government remains in place, but without the right to "process laws in the Assembly".

According to Peci, the current government still "has all the powers to manage the situation with Covid-19", including the right to pass administrative instructions, to manage the outbreak.

The government led by Kurti was overthrown on Wednesday by a no-confidence motion initiated by the junior party in the governing coalition, the Democratic League of Kosovo, LDK.

With 82 votes in favour, 32 against, and 1 abstention, the government was toppled following a series of disputes over important decisions between the main governing Vetevendosje party, to which Kurti belongs, and the LDK.

That left many citizens deeply worried, fearing for the proper management of the Covid-19 pandemic in these complex circumstances as the outgoing government cannot remain in place forever.

The constitution predicts that if the prime minister resigns, or his or her post becomes vacant, "the government ceases", and the President must "appoint a new candidate in consultation with the majority party or coalition that has won a majority in...