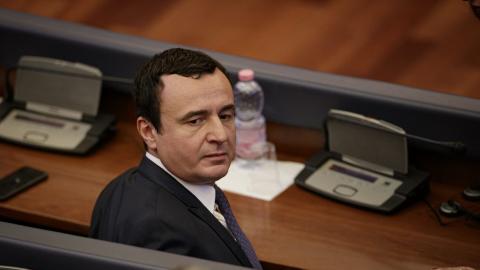 The latter option would mirror previous practice established after successful no-confidence votes in 2010, 2014 and 2017. However, one obstacle to this is the coronavirus pandemic.

Elections have already been postponed in neighbouring Serbia and North Macedonia, and the idea of scheduling a snap election - which would have to be held within 45 days of parliament's dissolution - seems unlikely in the circumstances.

However, if the President decides against dissolving the Assembly, he will have to repeat his request to Vetevendosje - as the party that received most votes in the October 2019 elections - to submit the name of a new candidate for prime minister.

Vetevendosje made it clear after the 2019 election that the only party it would seek to enter into a coalition with is the LDK. With that coalition now in tatters, it is hard to envision any other constellation of parties forming a government with Vetevendosje as the lead partner.

Crucially, Vetevendosje will also have full discretion to decide when it responds to President Thaci's request to nominate a prime minister, as the constitution does not set any time limit on this decision.

This means the party can continue in a caretaker role almost indefinitely, if it does not submit a candidate. However, other parties will likely challenge such stalling tactics in the Constitutional Court, which would be able to resolve the issues caused by the absence of a deadline.
If Vetevendosje does eventually provide a candidate, and the Assembly rejects it, the President can ask another political subject to nominate a candidate, which is likely to be LDK, as the second placed party in October's...