Passengers stranded at Istanbul airport sent to another city 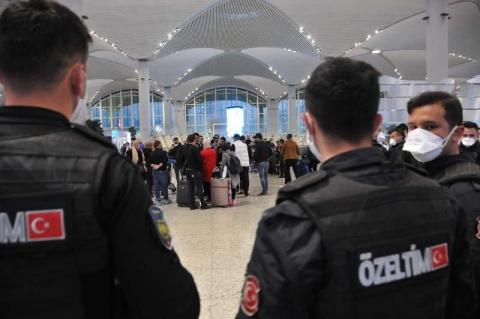 More than 1,500 passengers, mostly from Algeria, Tunisia and Jordan, who have been stranded at Istanbul Airport, have been transferred to an emptied student dormitory in the northern province of Karabük.

Those passengers have been stuck at the airport for days after their countries closed airspace and flights were canceled because of the coronavirus pandemic.

A dormitory in the Karabük has been arranged for the passengers, who are not currently allowed to enter their countries.

They were escorted by the police to the buses which transferred them to the dormitory where they will stay until they can return home.

Most of those international travelers are reportedly from Algeria.

İGA, the operator of Istanbul Airport, said earlier this week in a statement that more than 1,000 Algerian nationals had been staying at the airport for several days because the Algerian government decided not to allow its citizens return back to their country due to the outbreak which already killed nearly 20 people there.

İGA noted that besides the Turkish Red Crescent, Turkish Airlines also tried to meet the needs of those people.

Turkey has been making efforts for a week to persuade the Algerian government to grant landing rights for the affected flights, İGA also said in the statement.

Turkish Airlines halting all int’l flights except 5 routes
MAE:Romanians at Austria's border with Hungary can cross Hungarian territory according to the instructions of authorities