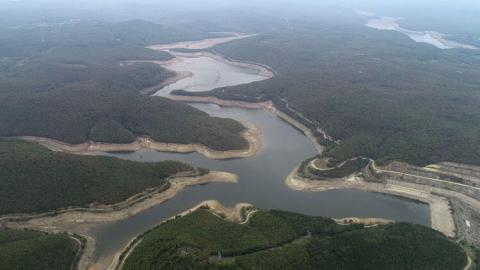 The water level in Istanbul's dams declined as much as 31 percent from a year ago as the city that is home to some 16 million is grappling with the coronavirus pandemic.

Experts warn the residents that further decline in water levels may cause problems in the summer season because personal hygiene is the most effective protection against the virus.

According to the latest data, the water level in Istanbul's dams fell to around 64 percent of their capacity compared with the 94 percent a year earlier. This marked the second-lowest water level in the past 10 years.

"The precipitation was significantly low in the western regions in 2019 and the months of April and May ahead may not be any different in terms of rainfall," said Professor Hüseyin Toros from Istanbul Technical University's department of meteorological engineering.

He reminded that people need to pay extra attention to hygiene rules to avoid the virus as they wash hands as advised by health experts. "But at the same time, we have to be very careful about water consumption. If we don't, the dams' capacity level will shrink further in summer, causing problems."

Toros noted that some two liters of water are wasted during handwashing for 20 seconds, which is what doctors recommend.

People sometimes use large amounts of water to wash fruits, Toros said, adding that we have to come up with solutions to reduce water consumption.

Meanwhile, officials from the Istanbul Metropolitan Municipality said there had not been a striking rise in water consumption over the past weeks.

Even if there has been an increase in households' consumption, the decline in water use in offices compensate for this, they said.

"First thing we do is wash our hands as soon as we...