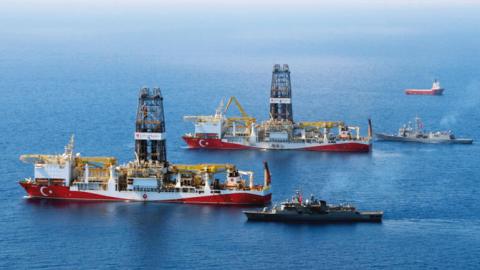 Turkey on March 26 slammed a statement by the Greek Foreign Ministry over Turkish maritime jurisdiction areas in the Eastern Mediterranean.

Hami Aksoy, a spokesman for the Turkish Foreign Ministry, dubbed the Greek statement "unfortunate and misleading."

"At the core of the Eastern Mediterranean issue lies the maximalist maritime jurisdiction area claims of the Greek/Greek Cypriot duo as well as the disregard of the Turkish Cypriots and their rights as the co-owners of the Island by both Greece and the EU," Aksoy said in a written statement.

The Turkish official said the attempts to legitimize such claims through the European Union and "maps published within this union carry no legal value whatsoever."

"The maritime jurisdiction area claims brought forward by Greece as if she was an archipelagic state, disregarding the principle of just and equitable delimitation, which is the primary rule in maritime boundary delimitation, are indeed the violation of international law. The most striking exhibit of this, as referred to in our previous statements, is the island of Kastellorizo/Megisti."

He stressed that Turkey will continue to keep the diplomacy and cooperation channels open while "protecting with determination" its own rights, as well as the rights of Turkish Cypriots.

Turkey's third drillship arrived in Taşucu, Mersin, a coastal city in the Mediterranean region of the country, on March 15.

Turkey is currently exploring the Eastern Mediterranean with two drilling vessels Fatih and Yavuz, along with Oruç Reis and Barbaros Hayrettin Paşa seismic vessels in the same region.

Turkey also plans to explore the Black Sea region where work has been suspended for a long while.