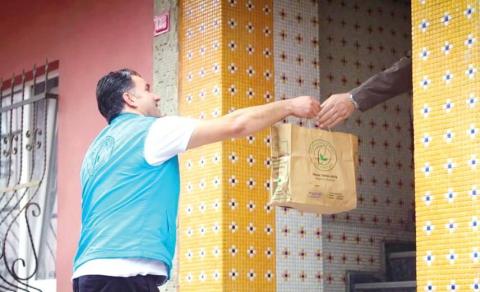 Food packages will be distributed to some 50,000 people in Istanbul as part of measures taken to slow the spread of the coronavirus, the city's governor has announced.

The recipients of the aid will be people who are over the age of 65 and those with chronic diseases, people who live alone and are not able to look after themselves, as well as low-income groups, said Ali Yerlikaya.

Some 300,000 packages will be made ready for distribution and these groups will receive food stables for six weeks, Yerlikaya noted, adding that the food distribution will commence on March 30.

Turkey on March 21 imposed a partial curfew for citizens over the age of 65 and those with chronic illnesses.

Meanwhile, Ekrem İmamoğlu, the mayor of Istanbul, has said that there will not be food shortage in the city, calling on people to avoid panic-buying.

The mayor said that he had a meeting with the executives of retailers and online delivery companies operating in the city to make sure the food and cleaning material supplies are provided uninterrupted.

İmamoğlu also noted that some 2,000 hotel rooms will be made available to health workers so that those people would avoid contact with family members and easily commute to their hospitals.

Certain venues operated by the municipality have been designated as temporary quarantine centers and field hospitals, the mayor also said.

On a related note, in line with recommendations from the Health Ministry's Science Council and the Presidency of Religious Affairs (Diyanet), two cemeteries in Istanbul have been designated for the burial of those who died from the coronavirus.

One of those sites is in Istanbul's Beykoz district, on the Asian shore of the city, while the other designated...