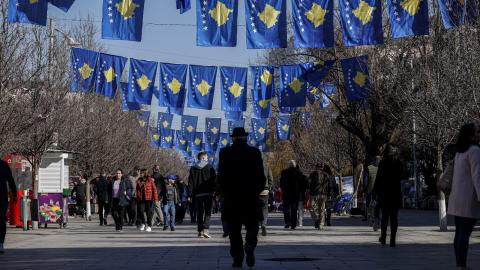 In this endeavour, Thaci is believed to have secured support US President Donald Trump's envoy for Serbia-Kosovo peace negotiations, Richard Grenell. A man of many titles - he is also the acting Director of National Intelligence and the US ambassador to Germany - Grenell has denied that the partition of Kosovo has been discussed in secret as part of the rumoured peace deal.

However, the US did back the no-confidence vote while the EU opposed it as irresponsible amid the coronavirus crisis. And with Kurti's administration out of the way, it would be easier for Thaci to seal a deal.

Kosovo is undoubtedly entering a stormy period - like the rest of the world it is struggling with the coronavirus outbreak, but with the added problem of a poor healthcare system, while it also has to deal with the negotiations with Belgrade and the current domestic political crisis, which could even require new general elections.

But another clock is ticking for Thaci and his former Kosovo Liberation Army comrades. Judges at the pre-trial chamber of the Hague-based Kosovo Specialist Chambers - the so-called 'special court' that will try KLA ex-guerrillas for wartime and post-war crimes - are currently reviewing indictments filed in January this year by chief prosecutor Jack Smith.

Smith, who leads the Specialist Prosecutor's Office in The Hague, was busy for the whole of last year interviewing over 100 former KLA fighters believed to have knowledge about crimes committed in Kosovo during the period of the court's remit, from January 1, 1998 until December 31, 1999.

Around half of those who claimed that they were questioned as suspects were affiliates or members of Thaci's Democratic Party of Kosovo. Among them was Kadri Veseli, the party's current leader...