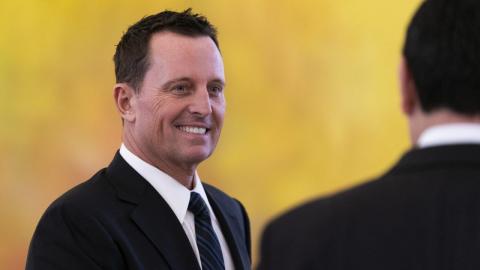 The US Special Envoy for the Kosovo-Serbia dialogue, Richard Grenell, the US Ambassador to Kosovo, Philip Kosnett, and the US Special Representative for the Western Balkans, Matthew Palmer, have dismissed claims made by outgoing Kosovo Prime Minister Albin Kurti that the Presidents of Kosovo and Serbia had reached a secret agreement on a land swap with their knowledge as part of a final deal on normalising relations.

"We want to make clear there is no secret plan for land swaps between Kosovo and Serbia, as some have speculated. Special Presidential Envoy Richard Grenell has never seen nor discussed such a plan," the joint statement said.

It came one day after the Kosovo parliament passed a no-confidence motion in Kurti's coalition government tabled by his junior partner, the Democratic League of Kosovo, LDK, following weeks of disputes between the partners in the midst of COVID-19 outbreak.

Kurti made the accusation during the parliamentary session for the no-confidence motion, claiming the real reason for the motion to get rid of him was a secret agreement on a land swap between Kosovo President Hashim Thaci and Serbian President Aleksandar Vucic.

The LDK initiated the motion after Kurti sacked the LDK Interior Minister from the government without seeking LDK approval.

The success of the motion made Kurti's cabinet the shortest government in the history of Kosovo, which collapsed after only 51 days. Kosovo MPs passed the motion despite European calls to act more responsibly at a time of crisis, and not risk leaving the country rudderless.

US relations with the Vetevendosje-led government were uneven from the start after he ignored US calls to completely lift the tariffs imposed on Serbian goods by his predecessor Ramush...