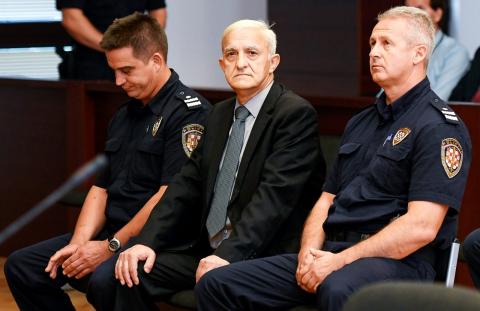 Former Serbian paramilitary commander Dragan Vasiljkovic, alias Captain Dragan, who was convicted of committing war crimes against Croatian civilians and prisoners of war in 1991, was released from Lepoglava prison in northern Croatia on Saturday morning after serving his 13-and-a-half-year sentence.

His lawyer in Croatia, Sladjana Cankovic, told BIRN that Vasiljkovic was released after serving his sentence in full. The Justice Ministry also confirmed this to Croatian media.

Media reported that Vasiljkovic was transferred to the Bajakovo border crossing, expelled to Serbia and banned from entering the European Economic Area for 20 years.

Dragan Palibrk, Vasiljkovic's lawyer in Serbia, told BIRN that he does not know if Vasiljkovic will be put in quarantine in Serbia.

In Serbia, which has 528 confirmed cases of COVID-19 so far, 28 days of quarantine is currently mandatory for all Serbian citizens returning from abroad. Depending on the country from which the returnee has arrived, this can be at home or in an official quarantine facility.

Vasiljkovic was found guilty of committing his crimes in June and July 1991at the fortress in Knin, where imprisoned Croatian policemen and soldiers were abused, as well as during an attack on a police station in the town of Glina and surrounding villages in July 1991, which result in the killing of one civilian and a journalist.

He was extradited to Croatia in 2015 from Australia, where he had been working as a golf instructor under the name Daniel Snedden.

He had moved to Australia at the age of 14 but returned to Yugoslavia before the start of the 1990s conflicts and was then sent by the authorities in Belgrade to be the commander of a training centre for a Serb special paramilitary unit...