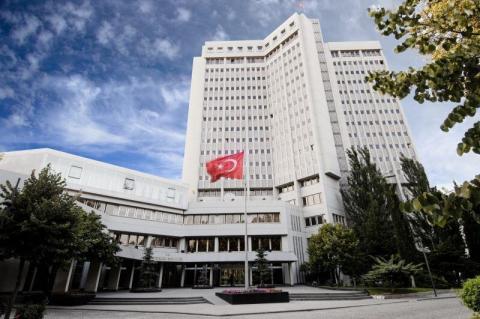 The "so-called" presidential and parliamentary elections set for March 31 in Upper Karabakh - also known as Nagorno-Karabakh, a region illegally occupied by Armenia - show Armenia's "efforts to unilaterally legitimize the current unlawful situation" there, the Turkish Foreign Ministry said in a statement.

"This is a flagrant violation of international law as well as U.N. Security Council resolutions and OSCE [Organization for Security and Cooperation in Europe] principles," the statement added.

The elections undermine efforts for a peaceful and permanent solution in the Upper Karabakh region, said the statement, urging the international community and the OSCE Minsk group to not recognize the illegal polls.

"Turkey does not recognize these illegitimate elections," which would further violate the sovereignty and territorial integrity of Azerbaijan, said the ministry, stressing Turkey's continued support for efforts to find a fair and permanent solution to the Upper Karabakh conflict.

Azerbaijan and Armenia, two former Soviet republics, fought a war over the disputed region of Upper Karabakh in 1988-1994. The two signed a cease-fire in 1994, but never reached a peace deal. Upper Karabakh remains unrecognized internationally as a separate state.

Turkey maintains that any resolution of the Upper Karabakh conflict should take into account Azerbaijan's territorial integrity.

Upper Karabakh is an internationally recognized territory of Azerbaijan which has been illegally occupied since 1991 by Armenian military
aggression.

Hospitals expected to return to normal operations in June