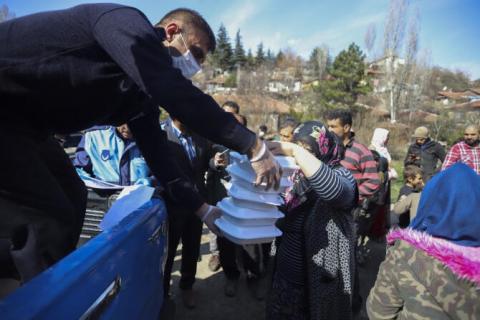 Turkey's main opposition Republican People's Party's (CHP) spokesperson said on March 30 that the party's municipalities have been working to help citizens with their needs during the coronavirus outbreak in the country.

"Our municipalities are doing everything in their power during this crisis, and they are showing a good record of work," Faik Öztrak said, after the Central Excutive Board (MYK) meeting of the CHP in the capital Ankara.

Öztrak said that all of the CHP's municipalities helped citizens access water, even subscribers whose water supply has been cut off due to unpaid bills.

"They all mobilized to meet the needs of our citizens aged 65 and above. They postponed the rents of the municipalities' shops," he said.

"They also started to give food aid to the families in need," he added.

Öztrak also accused the government of "running away from responsibilities" regarding the management of the outbreak.

"The figures announced about the outbreak's spread is worrying. The number of conducted tests is still behind Germany and Italy's [tests]," he said.

Öztrak also referred to the Health Ministry's Science Board's warnings about this week's "critical" situation regarding the spread.

The government should not have "refrained" from imposing a full curfew in the country or in the "critical" provinces, Öztrak added.

"Why does the state exist? It exists for such days. When will the state protect the lives and health of its citizens if it cannot do so today?" Öztrak said.