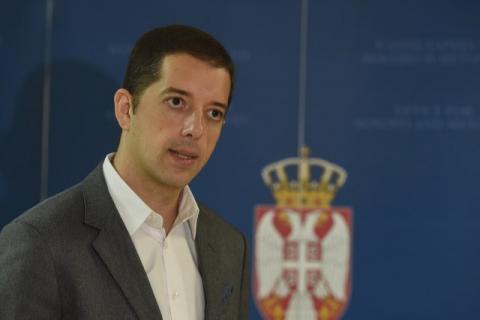 Djuric urged the public not to fall for the fake news.
Kosovo Prime Minister Albin Kurti announced tonight that the Government of Kosovo has decided to abolish
tariffs on products from Serbia and Bosnia and Herzegovina and introduce reciprocity measures only in relation to Serbia. "The Prime Minister of the Interim Institutions of Self-Government in Pristina (Kurti) has announced, to be precise, only a partial suspension of taxes, and this is conditional, while introducing new punitive measures for our citizens and the economy, which he calls reciprocity," Djuric said in a written statement.
Djuric said that Pristina continues to "play" with this issue and the economic perspective of Kosovo's society, and that the decision presents a "performance" for the international community. He said that the decision did not "de-escalate" the situation between Serbia and Kosovo and did not return to the situation prior to the introduction of "anti-civilization tariffs" on goods from central Serbia, but that, in the "perfidious way", the barriers that hadn't existed so far have now been introduced, such as limiting trade and movement of people and goods. "However, I believe it is by no means time for measures like those adopted by Pristina tonight, but this is a time when even deep and substantial differences with Pristina need to be put aside, as we all need to work forcefully and directly to fight to overcome the epidemic which does not recognize the difference between borders, political commitment, religion and nation", he said.

"Either that pedophile politician exists and we'll arrest him, or there isn't any"