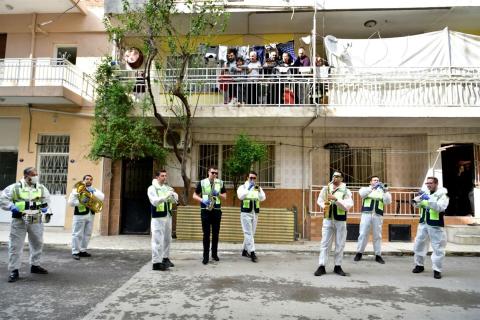 As Turkish citizens have locked themselves in their homes to avoid getting infected with the novel coronavirus, marching bands of some local authorities have started giving street concerts in order to boost their morale.

The marching band of the Aegean province of İzmir's Bornova district municipality took to the street to put a smile on the faces of the residents staying at their homes.

The band members wearing their protective overalls, face masks and gloves walked around neighborhoods and played jovial songs and marches in the district.

Citizens also accompanied the members of the band from their balconies and their doorsteps, while the band played the instruments for about four hours, giving the citizens an enjoyable time.

Bornova Mayor Mustafa İduğ emphasized the importance of having high morale as much as the measures taken in this difficult process. He said that putting a smile on the faces of the citizens is a source of happiness for them.

"Let us be cautious without losing our hope and follow all the rules. We will survive this process together," İduğ said.

In the resort town of Fethiye in the Aegean province of Muğla, the municipality's band also gave morale concerts to citizens who could not go out of their homes due to the epidemic.

The marching band, wearing hygienic overalls and face masks, gave mini concerts by visiting the neighborhoods in the district.

The people of Fethiye accompanied the marching band with cheers and dances from their windows and balconies.

In the Keşan district of the northwestern province of Tekirdağ, the municipal marching band also organized a street concert for citizens who took measures in their homes against the epidemic.

Watching the concert on the...