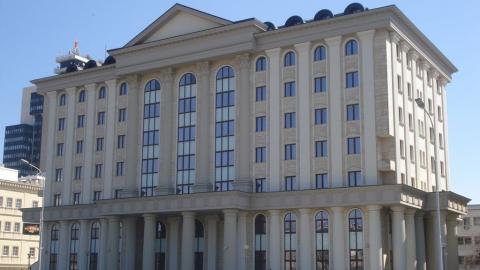 Skopje Criminal Court on Tuesday sentenced Democratic Union for Integration, DUI party officials Ejup Alimi and Ismet Guri to three-and-a-half years in jail each for the "destruction of electoral materials" in Skopje's municipality of Cair during the 2013 local polls.

The first-instance verdict said that the men, who were members of the Cair local electoral committee at the time, altered official records of the voting process by adding votes for the DUI mayoral candidate and removing votes from his adversaries.

During the reading of the verdict, judge Marija Kletnicka said that Guri threatened the head of the electoral commission in Cair and forced him to sign the falsified records.

Based on the falsified documents, the State Electoral Commission partially scrapped the voting in the municipality, giving the DUI candidate a fresh chance at victory.

According to the verdict, the defendants managed to forge a total of 12 electoral voting records.

The charges in the court case, which was codenamed 'Titanic 3', were filed by the Special Prosecution, which before practically dissolving late last year was tasked with investigating allegations of various high-level crimes revealed in wiretapped telephone conversations from 2015.

The wiretapped conversations were published by the then opposition Social Democrats, who now lead the ruling coalition, and caused a deep political crisis and the eventual ousting of the VMRO DPMNE-led government under Prime Minister Nikola Gruevski, in which the DUI was the junior ruling partner, as it is now.

Due to its focus on electoral irregularities, the 'Titanic 3' case is loosely linked to the cases codenamed 'Titanic' and 'Titanic 2', which mostly involve high-ranking former VMRO DPMNE officials...