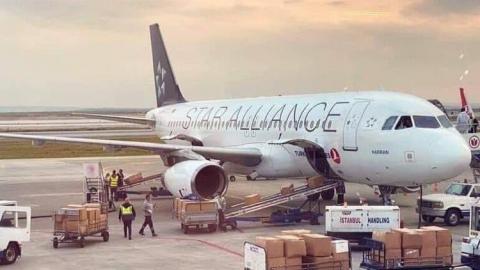 President Recep Tayyip Erdoğan has said that Turkey is sending aid to Italy and Spain, Europe's most hard-hit countries, during their fight against the novel coronavirus pandemic.
Erdoğan late on March 30 launched a "National Solidarity Campaign" where citizens can donate money for the country's fight against COVID-19. He said that he was donating his seven-month salary for the campaign.
In his address to the nation, Erdoğan said that Turkey has sent many medical and hygiene equipment to many countries and is in the process of sending more to Italy and Spain.
"Turkey is a country which has to carry on producing and keep the wheels turning," Erdoğan said.
"We have sent medical and hygiene equipment to many countries during their difficult times," he added.
The president said that a "plane full of equipment" will be sent to Spain on April 1. He also said that "a ship full of aid" is being sent to Italy via the Turkish Red Crescent (Kızılay).
"The more powerful Turkey is, the more it will give a helping hand to its friends," he said.
Meanwhile, Turkish Foreign Minister Mevlüt Çavuşoğlu held a phone conversation with his Italian counterpart.
During the discussion, Italian Foreign Minister Luigi Di Maio conveyed his country's gratitude and thanks for Ankara's "help and cooperation" during the virus crisis.
Italy, which is the world's hardest-hit country in terms of the number of deaths and accounts for more than a third of all global fatalities, saw its total death tally rise to 11,591.
The death toll has risen by 812 in the last 24 hours, the Civil Protection Agency said on March 30, reversing two days of declines, although the number of new cases rose by just 4,050, the lowest increase since March 17, reaching a total...