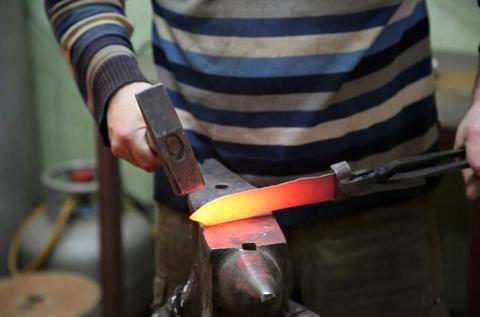 A former military officer, who was wounded 10 years ago after a counter-terrorism military operation, is producing traditional and historical war tools in a workshop he established in the Aegean province of Manisa.

Altanay, who has analyzed historical swords and war tools in various museums and collections since 2011, has improved himself in this field with the help of hundreds of written sources.

Altanay, who learned all the fine details about armor, helmet, arrow, bow, shield and sword at the beginning, was chosen as the "cultural heritage carrier" by the Culture and Tourism Ministry in 2018.

The veteran officer, who had been putting an iron on the high-temperature propane stove for hours with his arm power, reveals a similar sword made thousands of years ago with the engravings on it.

Altanay teaches history buffs and how to make swords and traditional war tools in his workshop and wants to pass down his profession to the next generations.

Pointing out that the sword-making needs a fine math calculation, Altanay said that the sword may appear as a very simple tool, but it has many different forms.

"As I researched, I did not see that this was done in the country by staying true to the original. Yes, there are masters who make swords, but they are not made in accordance with the original. It all started when I realized that there was a very fine math science on the sword," Altanay said.

Expressing that he has studied more than 700 swords and read hundreds of works related to Turkish sword and weapon art, Altanay said he is not afraid to stick to the original while making a sword.