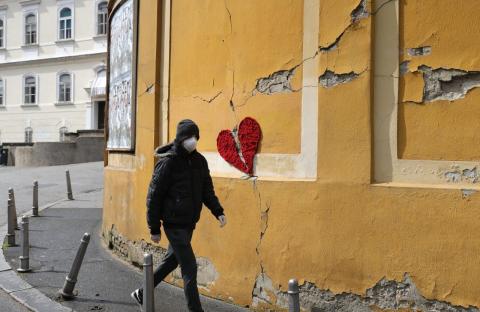 While the soil continues to shake occasionally, and earthquakes of lesser intensity are still being felt, many Croats still suffer from high anxiety as a result of events on March 22, when a quake of at least 5.3 magnitude struck close to the capital, damaging buildings and injuring dozens of people and causing one death.

"I no longer know whether I am [only] imagining earthquakes or not. Still, two earthquakes in the last half hour were confirmed," one Twitter user wrote on March 30.

"I'm trying to sleep; something slams, maybe the neighbours. I opened Twitter to see if there is an earthquake," another Twitter user wrote on March 29.

Nervousness about quakes is not only visible through people's activity on social networks but through much increased use of mobile apps specializing in such tremors.

One is LastQuake, the official phone application of the Euro-Mediterranean Seismological Center, EMSC, designed by seismologists to alert populations and gather testimonies in real-time.

On Saturday, EMSC reported on Twitter that for the first time it had received as many as 600 reports of a 1.5 magnitude earthquake from the Zagreb area.

Remy Bossu, from EMSC, told BIRN that the current situation in terms of use of the app in Zagreb was "comparable with what we observed last November in Albania". [Northwestern Albania was struck by a strong 6.4-magnitude earthquake in November 2019 that killed at least 51 people.]

"In both cases, there is a high density of LastQuake app users - 100,000 in Croatia, mainly in Zagreb, and 200,000 in Albania - and this seismicity was beneath highly populated...