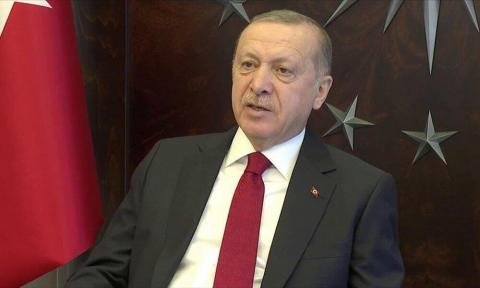 Turkish President Recep Tayyip Erdoğan on April 1 slammed the Republican People's Party (CHP) municipalities for carrying out their own fundraising campaigns to help citizens during the coronavirus outbreak, accusing them of attempting to be "a state within the state."

"There is no need to be a state within the state. In this sense, all these campaigns are being carried out by the [institutions] our state's Presidency has announced," Erdoğan said.

He further elaborated that the fundraising works are being carried out by the Interior Ministry, the Family, Labour and Social Services Ministry and the provinces' governor's offices.

The president's remarks came during a speech at a meeting with the ruling Justice and Development Party's (AKP) provincial heads.

"If our municipalities launch campaigns without the governor's offices' permission, this is called being a state within the state," he said.

"[Then] we would have distributed the power. No one has the right to do so," he added.

The Istanbul and Ankara metropolitan municipalities, run by the CHP, recently launched their own donation campaigns to provide help to citizens in need during the coronavirus crisis.

The Interior Ministry issued a circular on March 31 stipulating that municipalities need to get permission from the corresponding governor's offices for the launched donation campaigns.

After the ministry's circular, Istanbul Mayor Ekrem İmamoğlu said in a Twitter post that municipalities and mayors have the authority to accept and collect donations.

"If we are not going to coalesce and be in solidarity today, if we are...