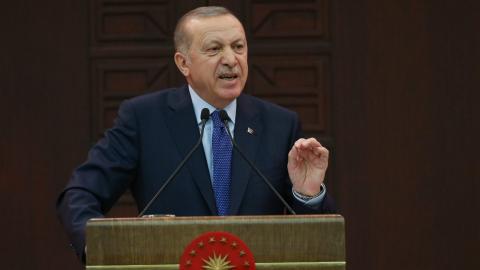 Turkey's three largest metropolitan municipalities, of Ankara, Istanbul and Izmir, which are all ruled by the opposition parties, have been accused of running a "parallel state" by President Recep Tayyip Erdogan as the nation fights the COVID-19 pandemic.

The Interior Ministry on Tuesday banned municipalities from collecting their own donations to help those suffering in the pandemic, saying this cannot be done without permission from the state government.

"The logic of these campaigns is being a state within state. No one has a right to do that, and the laws do not allow it," Erdogan said at a press conference on Wednesday.

Municipalities ruled by the main opposition Republican People's Party, CHP, in a joint statement on Wednesday, said that there was no time to lose with such discussions while people were in need.

But despite that, the bank accounts of the municipalities used for collecting donations have been blocked by the Interior Ministry, and the collected funds now cannot be used.

The Istanbul Municipality has filed a lawsuit seeking cancelation of the decision of the government.

"Blocking bank accounts is against the law. Collecting donations is among the duties of the municipalities, in the Law on Municipalities," the Istanbul Municipality's legal office said in a statement on Wednesday.

President Erdogan started his own national donation campaign on Monday to help Turkish citizens suffering in the novel coronavirus outbreak, and joined the campaign himself by donating from his various salaries.

Opposition parties, however, want to run their own campaigns, which often started before the presidential one, and saying that local authorities are better placed to help people in the ground.