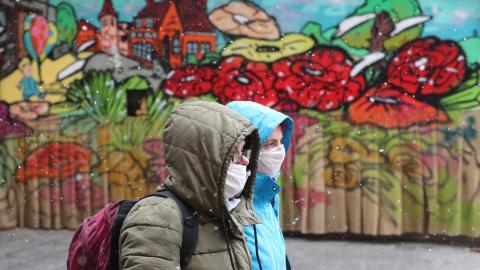 Bosnia and Herzegovina is not alone in using age as a determinant for developing guidance to particular populations, but has taken it to extremes by creating a punishable offence that only certain age groups can be charged with.

The rights group Human Rights Watch has received official data showing that between March 20 and 30, police in Republika Srpska issued 217 fines to older people, and that police in the Sarajevo Canton issued 20 such fines, some to children.

The spokesperson for the Interior Ministry in the Canton of Sarajevo said that older people who ask for permission to leave their homes in exceptional circumstances, for example, to visit a doctor, will not be fined. The spokesperson also clarified that the average fine was 500 Marks, or about 255 euros, which is higher the average monthly pension in either the Federation [less than 420 Marks] or Republika Srpska [less than 380 Marks].

International law permits restrictions on certain rights, and at times, such as during the COVID-19 pandemic, more extensive restrictions may be justified. But they still have to be evidence-based and neither arbitrary nor discriminatory. And they also need to be limited in duration, subject to review, and necessary and proportionate to achieve the objective.

The orders in Bosnia and Herzegovina do not meet these criteria. First, singling out age as the sole determinant is problematic. While older people are among those at high risk of death from COVID-19, there are also increased risks for people of any age with certain underlying health conditions. These include heart and lung diseases, including asthma or chronic obstructive pulmonary disease, liver...