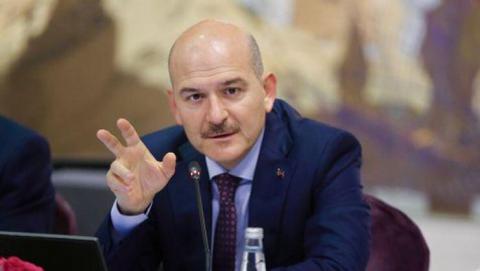 Turkey's Interior Minister said on late April 2 that Istanbul, the city with the most confirmed coronavirus cases, imported the COVID-19 cases from Europe and the government has been paying extra attention to the situation in the metropolis.

"The city that we've been paying the most attention to is Istanbul. The city our president says special precautions should be taken in is Istanbul. [The outbreak] started with China, Iran and then Europe. Istanbul is very intertwined with Europe," Soylu said in an interview with private broadcaster CNN Türk.

Health Minister Fahrettin Koca announced on April 2 that most of the coronavirus cases were registered in Istanbul, with 8,852 patients.

Soylu said that the main reason Turkey initially suspended flights with nine European countries was that the coronavirus data was "gradually increasing."

"Because Europe is causing transmission. We also know which and how much [cases] came from the Umrah [pilgrimage]. But Europe actually impacted Istanbul and caused transmission," he said.

The minister said that after the cases were imported from Europe, the ministry held a meeting with Istanbul's governor and district governors.

"We closed about 218,000 shops, including the measures taken at outdoor markets, in Turkey. Many of these are in Istanbul," he said.

"In essence, we banned entries and exists from and to Istanbul and halted domestic flights when we saw that the cases in some provinces were imported from Istanbul," he added.

When asked if there is any concern of spread from Istanbul, Soylu said that the government is closely following the confirmed cases and where they are imported from.

"We are trying to take precautions as much as possible based on these stories. We...