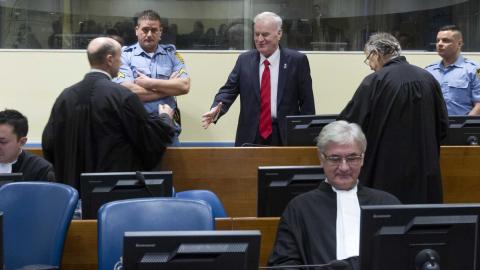 Miodrag Stojanovic, one of the lawyers representing Ratko Mladic at his trial in The Hague, told BIRN that the former Bosnian Serb military commander had a colon operation on Monday and has now left hospital.

"He was discharged from the hospital yesterday [Wednesday] and returned to the [UN] detention unit [in the Netherlands]," said Stojanovic.

Appeals against the verdict convicting Mladic of wartime crimes including genocide were due to be heard at the Mechanism for International Criminal Tribunals on March 17 and 18, but were postponed so he could have the operation.

The Hague court initially said that the hearings would be rescheduled for about six weeks after the operation to allow Mladic to recover. However, court sessions have now been suspended due to the coronavirus pandemic.

The court sentenced Mladic to life imprisonment in November 2017, finding him guilty of genocide in Srebrenica in 1995, the persecution of Bosniaks and Croats throughout Bosnia and Herzegovina, terrorising the population of Sarajevo during the siege of the city, and taking UN peacekeepers hostage.

A date for the final verdict has not yet been set, but Carmel Agius, president of the Mechanism for International Criminal Tribunals, has said it will be delivered by the end of this year.

Mladic, 76, has had several serious health problems while in detention in the Netherlands and has suffered two strokes and a heart attack.

An association of lawyers working at international courts last week urged the Hague court to grant early or provisional release to elderly war crime convicts to...