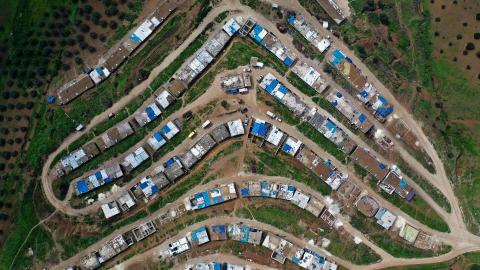 The war in Syria killed 103 civilians in March, marking the lowest monthly non-combatant death toll since the start of the conflict in 2011, a war monitor said on April 1.

Of the total deaths, some 51 people were killed in shelling and air strikes by the Syrian regime, the Britain-based Syrian Observatory for Human Rights said.

The bulk of the remaining casualties were caused either by explosive remnants or mysterious "assassinations", the Observatory added.

The civilian death toll was more than double that of March in February, when a regime offensive on Syria's last major rebel bastion was still in full swing.

According to the Observatory, the number of deaths that month stood at 275.

The war in Syria has left more than 380,000 people dead since it started nine years ago.

The highest civilian death toll recorded in a month since the start of the conflict was 1,590 in July 2016, when battles between rebels and the regime raged in the northern province of Aleppo.

Damascus in early March paused a military offensive on rebels and jihadists in Syria's northwest, after a ceasefire brokered by regime ally Russia came into effect.

The Moscow-backed campaign had displaced nearly a million people in the region since December, piling pressure on informal settlements already brimming with families forced to flee previous bouts of violence.

The fate of the displaced has been a key concern of aid groups amid an outbreak in the country of the novel coronavirus, which has killed two and infected eight others.

The United Nations has appealed for a nation-wide ceasefire to tackle the novel coronavirus threat, while aid groups have warned of a health catastrophe if the...