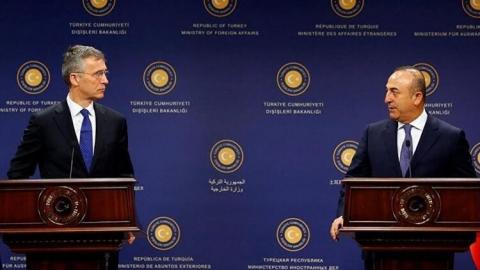 NATO's political dimension should be strengthened, and a group of 10 experts has been formed for this purpose, Turkey's foreign minister said on April 2.

Mevlüt Çavuşoğlu made the remarks after attending a NATO foreign ministers meeting, noting the group includes Turkey's Ambassador Tacan İldem, who has been working as NATO Assistant Secretary-General for Public Diplomacy.

Çavuşoğlu recalled that Turkey has fulfilled all its duties under the March 18, 2016 EU-Turkey refugee agreement while the EU has not.

"We expect sincerity and honesty from the EU.

"We tell them to think in the long run because this is not just an issue of migration," he said.

He noted that the EU should do its part on issues such as visa liberalization, updating the Customs Union Agreement and counter-terrorism.

Çavuşoğlu said an agreement would be made if the EU is sincere in this matter.

"If the EU is not sincere and does not keep its promises, it should not have any expectations of support from Turkey in this matter.

"This is not a threat. It is a very clear, sincere view and explanation. This is Turkey's position," he said.

Çavuşoğlu noted that many NATO members had mentioned Turkey's acts of solidarity in recent times.

A Turkish military aircraft carrying medical aid departed from the capital Ankara on April 1 for Italy and Spain, the nations worst-hit in Europe by the novel coronavirus.

Some 93% of coronavirus victims were 65 or older: Minister

Culture and arts season to open in September