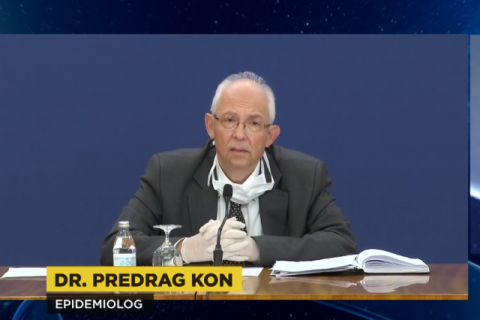 "What happened today - as much as we expected - still surprised us," the Prime Minister said.
"As of yesterday, at 3 pm, we had eight dead, which is the highest number of deaths, the largest so far," Brnabic said at Batajnica Airport, upon receiving Russian assistance in Serbia.
Prime Minister said that as of yesterday at 3 pm, 305 newly infected with COVID-19 had been registered, almost three times the number registered yesterday when there were 111 more.
"This is the day I fear we have gone into exponential growth," Brnabic warned. She thanked the Russian partners for their help, pointing out that we needed it and that it was coming on a difficult day for Serbia.
"This is the day when we entered the fifth week of the fight, when we are entering two very difficult weeks, which can be seen by today's numbers", Brnabic said.
"It seems to me that we did not expect such a huge leap in the number of infected people, over 40% of all tested positive. It is really scary," she added.
Brnabic expressed her concern that we have grown exponentially in the fight against the coronavirus epidemic, as evidenced by the latest data on the number of infected people and that is why she warned the citizens that without steel discipline we could not win "this war".
"We still lack discipline. Without steel discipline, we cannot win with all the medicines, equipment, millions of respirators, or with the support of experts from Russia, the EU, China, the United States," Brnabic said after receiving an airplane at the airport, delivering Russian aid.
She once again urged citizens to take the situation and the measures set by the Government seriously.
"Please take this seriously, I repeat, don't be fooled by the sunny weather, we are in...