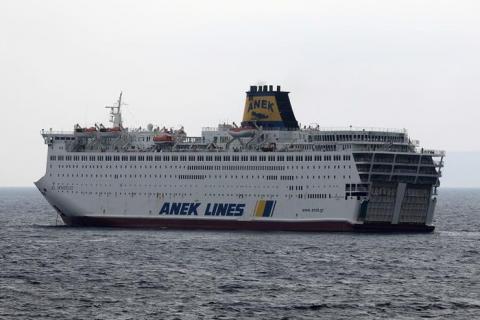 A Greek ship that set off from the Çeşme district of the western İzmir province in Turkey on March 7 and on which 120 out of 383 people have been tested positive for COVID-19 is still waiting on the shores of the Greek city of Piraeus.

The Greek cruise ship, aboard which 160 people are reported to be Turkish nationals, has been placed in quarantine near Athens after the passengers tested positive for COVID-19, sources from the Transportation Ministry told Hürriyet Daily News on April 2 on condition of anonymity.

The Eleftherios Venizelos was sailing from Turkey to Spain when it stopped at the port of Piraeus on March 22.

A Turkish company rented out the vessel to carry workers, mostly from the Philippines, to Spain in order to serve in the sailing industry, according to the sources.

However, Spain did not allow the ship to dock at the port when the virus outbreak appeared. The ship then returned to Turkey and requested permission to enter the country two weeks ago.

The vessel then sailed to the Piraeus port of Greece and tried to dock at the port there, but the Greek authorities also did not allow them to approach the port.

Turkey asked Athens to evacuate its citizens, however, the ship later quarantined off the port when some passengers showed symptoms of COVID-19.

Then some 120 of the passengers were reportedly tested positive. "Two-three" of them have been disembarked to be taken to treatment, said Turkey's Ambassador in Athens Burak Özügergin...