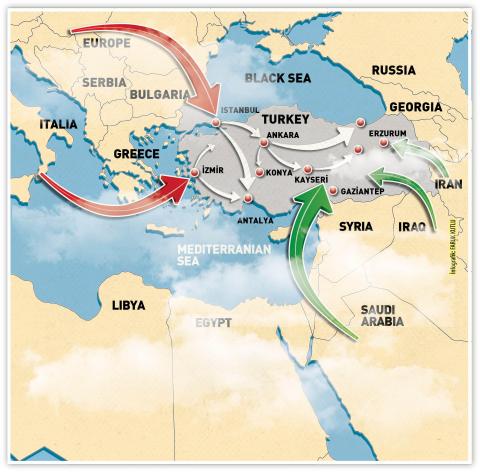 Studies are increasingly establishing how the coronavirus is spreading across Turkey by following different point of contacts and routes.

Officials try to keep track of how people got the virus by documenting their interactions and their stories.

For instance, mostly people traveling from Europe contaminated Istanbul and İzmir, two provinces which have reported the highest number of confirmed cases to date, while the spread of the virus followed different paths in other parts of the country.

Istanbul alone accounts for nearly 60 percent of all confirmed cases with nearly 9,000 cases, while İzmir, the third largest city by population, came second with almost 900 cases.

From Istanbul, the virus has spread to at least four to five other cities, including the northwestern province of Kocaeli and the capital Ankara, which has the third largest number of virus cases in the country.

Initial studies revealed that the main spreaders of the virus in the Central Anatolian provinces were those who returned from the Umrah pilgrimage in Saudi Arabia. The pilgrims who were not put in quarantine when they arrived in Turkey passed on the virus to locals in those areas.

In the eastern and southeastern provinces, the virus cases increased due to people who traveled from Turkey's larger cities to the settlements. Also, residents in those areas with contact with neighboring Iran and Iraq contracted the virus.

The virus arrived in the provinces in the Mediterranean region after people in other cities traveled there, which are popular holiday destinations particularly Antalya, following a school break as well as expats living in Europe that arrived in towns here.

The pattern of the spread of the virus was pretty much similar in the...