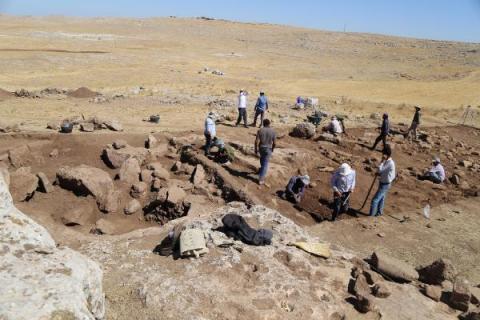 Karahantepe ancient site in the southeastern province of Şanlıurfa, which is home to more than 250 Neolithic-era T-shaped obelisks similar to the ones in the world-famous Göbeklitepe, is on the way to become the new face of Turkey.

As part of the "Göbeklitepe Culture and Karahantepe Excavations" project, surface surveys were initiated two years ago by Istanbul University in the area, known as "Keçilitepe" by the people of the region.

The first excavation works in the region were started last year under the presidency of Necmi Karul from Istanbul University with the permission obtained from the Ministry of Culture and Tourism, General Directorate of Cultural Heritage and Museums.

Karul said that 12 spots, believed to be during the same period as Göbeklitepe, were already identified in the region, and one of them was of Karahantepe.

The professor said that the tools used in this region showed that a hunter and gatherer community lived there.

Excavations in Karahantepe will find the answer to many questions in mind, said Karul.

He, however, added that the excavation works planned to be carried out in spring wit-hin the scope of weather conditions and coronavirus measures were postponed.

"Culture and Tourism Minister Mehmet Nuri Ersoy attaches great importance to the work carried out in Karahantepe. We hope this place will be the new face of the co-untry in the future," Karul added.