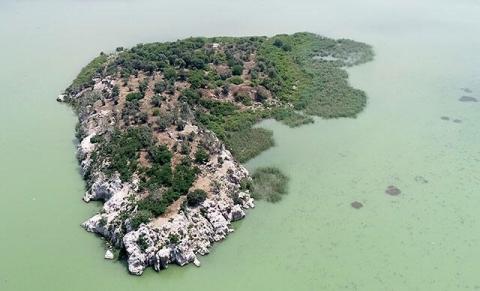 An uninhabited island is up for sale and is drawing interest like none before.

Interest in the 45-acre island in the middle of the northwestern province of Bursa's Uluabat Lake, which was put up for sale by its owner, has seen a surge, after a majority of Turks have locked themselves into their homes as part of self-isolation and quarantine measures against the spread of the novel coronavirus.

The island, located in Uluabat Lake in the Karacabey district, was put up for sale three years ago by its owner Nedim Bulut.

But since partial curfews came, Bulut has received many offers for his 17-million-lira ($2.52 million) island, lined with 500 olive trees, and especially after world-famous football player Cristiano Ronaldo quarantined himself with his family on an island after the coronavirus became a global pandemic.

Bulut said that the number of people who submitted price requests has increased five times compared to the pre-epidemic time.

Construction is not permitted on the island, which is a popular destination for migratory birds such as storks and pelicans, and the natural home of ducks.

"This is a protected place under the Ramsar Convention. Making construction is not allowed here. However, building a bungalow-style house can be allowed," Karacabey Mayor Ali Özkan said, adding that the soil of the island is very fertile.

The Uluabat Lake, under the protection of the International Ramsar Convention, includes 20 large and small islets.