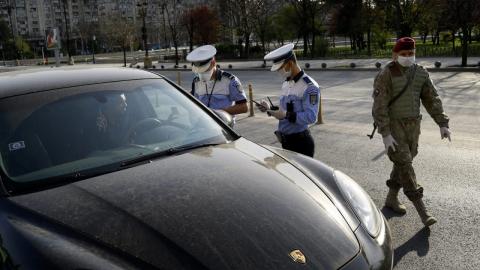 The authorities on Saturday banned anyone from entering or leaving the town of Tandarei in Ialomita county in south-east Romania after abnormally large numbers of COVID-19 infections and deaths were registered in the municipality of 13,000 in recent days.

Known for its extravagant, kitschy mansions, Tandarei has made international headlines in recent years as home base of one of Europe's largest and most active Roma-run human trafficking rings.

Romania's Interior Minister Marcel Vela said that 31 of the 48 people diagnosed with the coronavirus in Ialomita county are from Tandarei, as are seven of the total of eight who have died so far as a result of the virus.

Vela said that from now on, only essential transit will be permitted in and out Tandarei.

The isolation of Tandarei is set to last as long as the state of emergency declared on March 16 by President Klaus Iohannis.

Alarm over the outbreak in the town was raised earlier this week by a report published by recorder.ro under the title "The Ticking Bomb of Tandarei".

"Hundreds of people from Tandarei make a living in countries such as Italy, Spain, Germany and France, and once the outbreak spread across Europe, many of them returned home," the report said.

The deputy mayor of Tandarei, Lucian Achimas, was quoted as saying that "approximately 4,500" had recently arrived in the town from abroad and many haven't respected social distancing measures.

According to a local doctor, the outbreak in the town "started with a funeral held two weeks ago in the Roma community."

"From there cases started to roll," the doctor was quoted as saying.

Some 120 people from Tandarei have been convicted in Britain of crimes such as human trafficking and money laundering. The...