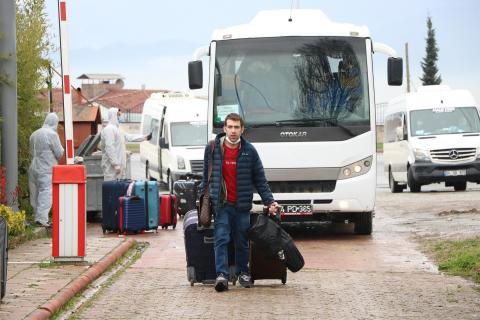 Turkey's youth and sports minister said on April 4 that 15,756 people who arrived in the country from abroad have been quarantined in 78 dormitories across 51 provinces.

According to a statement by Mehmet Kasapoğlu, the southern Mersin province is currently hosting 1,276 people, while the northwestern provinces of Sakarya (1,801) and Bolu (616), eastern Sivas province (736), the southeastern province of Gaziantep (652), and western provinces of Bursa (513) and Izmir (407) are also hosting those in quarantine who arrived from different countries as part of measures against the spread of coronavirus.

Furthermore, an additional 600 people from Ukraina and Montenegro have also been brought back to the country.

A total of 103 citizens, most of whom are students, were brought back to Turkey from Ukraine.

Also, 479 others were repatriated from Montenegro, Foreign Minister Mevlüt Çavuşoğlu said on April 4.

The evacuees were referred to dormitories to be monitored for a total of two weeks.

Turkey on April 4 confirmed that 76 more people died from the coronavirus in the country over the past 24 hours, bringing the death toll to 501, while the total number of confirmed coronavirus cases surged to 23,934.