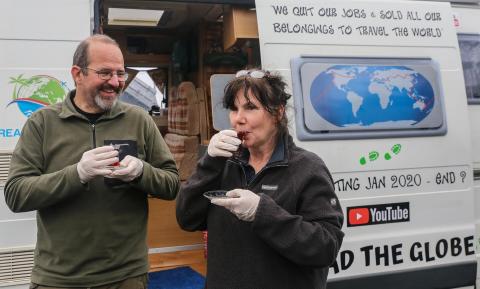 A British couple who were on a world tour on their caravan has been in voluntary self-quarantine in the parking lot of a sports facilities in Istanbul's historic Yenikapı district for 17 days, after Turkish borders closed due to the COVID-19 outbreak.

The Fisher couple had hit the road in 2018 setting off on a world tour on their caravan. They resumed their tour with a new route in January 2020, when the virus had still not appeared in many countries.

But as the virus began sweeping many countries, which sealed off their borders, the couple, who came to Turkey via Bulgaria, learned the Turkish borders were also closed as part of measures to contain the spread of the coronavirus. They were also recommended not to go out in the streets during their Istanbul visit.

The Fishers, in search of accommodation, were placed in the parking lot of Fatih Municipality Yenikapı Sports Facilities.

The duo, whose needs such as electricity and water are met by the municipality, has been in self-quarantine for 17 days and does not go out of the parking lot unless mandatory.

The couple living in the trailer said they were happy to be in Istanbul during this difficult time.

"The neighbors ask if we need anything, offer us coffee and dessert. We are very lucky. We think we are in the best place we could be," they said.

Noting that they came to Istanbul about three weeks ago, Chris Fisher said that they made videos about the city and posted them on social media.

He said that since the measures against the coronavirus outbreak have been tightened, they have only been out to shop for food twice in the last 17 days.

Stating that they want to know different cultures and meet new people and taste different foods during their...

AP: More Than 360 kg of Cocaine were Found in an Apartment in Sofia