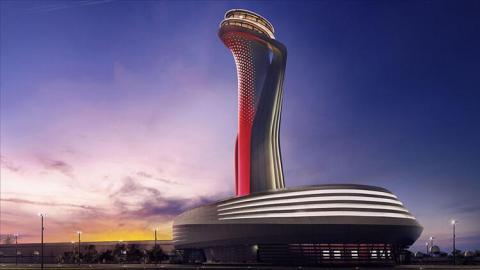 After operations were transferred from Ataturk Airport to the new Istanbul Airport, the new mega-airport served 64 million passengers in a nearly one-year period, from April 2019 to the end of this March, according to the airport operator.

The airport also hosted 74 aviation companies and 67 food firms and made 22.4 million ($24.2 million) in additional payments to the state, the airport's operator IGA announced on April 6 in a press release.

It said work on the airport's third airstrip will be completed as of June 18.

On the world aviation sector slowdown due to COVID-19, Kadri Samsunlu, IGA's CEO, said: "It won't take much time for people to return to their old habits after being confined to their houses for weeks."

The aviation industry will overcome the crisis and rise again, he added.

Adil Karaismailoğlu, the Turkish transportation and infrastructure minister, tweeted on the virus era: "Our whole aviation sector, and especially our flag carrier Turkish Airlines, will continue their journey more strongly, leaving behind these difficult days."

Istanbul Airport, launched in October 2018, has a capacity of 95 million passengers annually. With all four of its phases completed as of 2028, it will boast a passenger capacity of some 200 million.