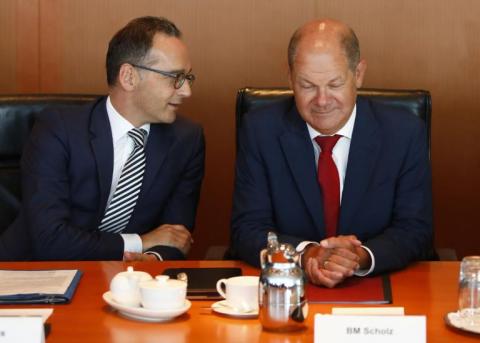 In a article co-authored by German Finance Minister Olaf Scholz and German Foreign Minister Heiko Maas the two ministers table a number of ideas on how the EU can get by through and after the coronavirus pandemic and grapple with its enormous social and economic repercussions in a spirit of solidarity that is needed to keep the Union together.

Even as a string of EU countries in Southern Europe and elsewhere are blasting Germany for stubbornly refusing a coronabond and mutualisation of debt, they argue for the absolute need for political and economic solidarity in order to keep the Union on its feet and on track in pursuing the ideals and objectives that led to its founding.

The authors argue for major aid packages to cover the financing needs of countries that most need it without austerity string attached which would produce the same mistakes as in the handling the aftermath of the 2008 economic crisis.

"We therefore propose that we work together quickly to ensure sufficient liquidity in all European Union countries, so that jobs do not depend on the whims of speculators. The funds must not come with any unnecessary conditions attached, as that would be tantamount to a rerun of the austerity policy that followed the financial crisis and would lead to unequal treatment between individual member states," the authors argue.

The full text of the article that was published today in the Athens daily Ta Nea:

This virus knows no borders; it does not differentiate on the basis of colour or...