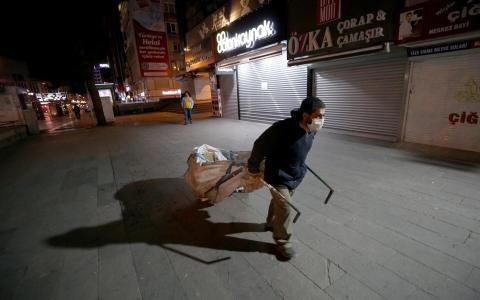 A vast majority of the Turkish public have expressed concern over the dangers the coronavirus pandemic is posing to the country, according to a recent survey.

Some 84 percent of those polled in March by Ipsos said the virus is the most important problem Turkey was facing, whereas 55 percent in January had said that it was economic issues.

In the March survey, only 10 percent of the participants cited economic issues as the most important problem.

The survey, carried out between March 26 and March 30, showed that 94 percent of the participants were worried about the coronavirus versus 79 percent in the early March poll. Around 76 percent of surveyed said they were "very worried" about the virus while only 1 percent noted that they were not concerned at all.

However, people appear to have come to believe that the pandemic will have adverse effects on the economy. Some 44 percent of the surveyed - between March 13 and 16 - said the pandemic poses a serious threat to the economy but the number of people who share this view soared to 69 percent in the final week of March.

The survey also unveils that people are increasingly becoming more pessimistic about the prospects of an end to pandemic any time soon. Back in mid-March, some 45 of the public believed the coronavirus pandemic could disappear within a "couple of months," but the number of people, who thought likewise, dropped to 36 percent in the late March survey.

According to the study carried out between March 26 and 30, 32 percent of the public think it may take more than six months for the pandemic to disappear.

The survey also revealed that the consumption of certain items has soared within a space of two weeks.

Demand for pickles, which some think could...