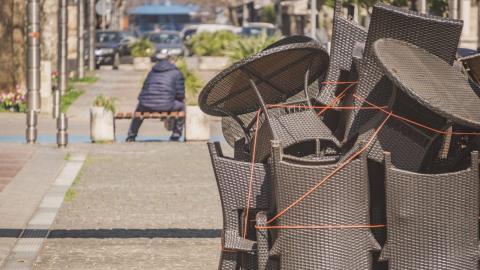 Dragan Ivancevic's Hotel Adria in the Montenegrin coastal town of Budva stands empty, its doors shut by a government-imposed lockdown to fight the spread of COVID-19.

For years, the money spent by tourists flocking to Montenegro's Adriatic coastline has been a mainstay of the former Yugoslav republic's economy, accounting for 21 per cent of national output last year.

Ivancevic says the fallout from the novel coronavirus sweeping the world could be devastating for the former Yugoslav republic of some 630,000 people.

"At this time of year, all the money from last year has been spent, so we usually take loans," he told BIRN. "With this epidemic, it's hard to take a loan when you don't know how to repay it."

Those living off tourism in the Balkans are braced for a sustained downturn; crowded beaches, traffics jams and long queues for ice cream are looking increasingly unlikely this summer.

"Certainly, no matter what happens, the season will not be normal," said Damir Kresic, director of the Institute for Tourism, a research and consultancy body based in the Croatian capital, Zagreb. "Even if the epidemic stops tomorrow, it would not be normal."

Like Montenegro, Croatia to the north and Albania to the south depend heavily on the flow of visitors to their respective stretches of the Adriatic coast.

In Croatia, tourism is responsible for almost 20 per cent of gross domestic product, GDP, with the number of visitors growing every year to a staggering 20.7 million in 2019, according to data from the state eVisitor system.

But for weeks, Croatia, like the rest of the Balkans,...