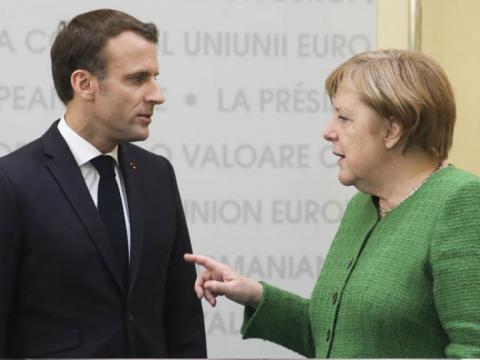 Markets and all EU member-states, especially those in Southern Europe which like Greece seek some form of mutualisation of debt have been  focusing like a laser beam on today's Eurogroup meeting and analysts expect joint action to help prop up the economies of member states - possibly including even so-called coronabonds.

A proposal by nine countries including Greece for the issuance of an emergency "coronabond" to grapple with the public health and economic repercussions of the Covid-19 crisis appeared unlikely but they would like it to remain on the table.

French President Emmanel Macron has tabled a plan for an emergency fund that would be endowed with 350bn euros or two percent of the Union's GDP from which member-states can borrow for a period of up to 10 years.

That is considered highly unlikely to be accepted by fiscal discipline hardliners such as Germany and the Netherlands which consider the plan too close to the mutualisation of debt involved in the coronabond proposal.

The Hague in particular has accused Southern European member-states of imprudent and untrammeled past spending and has essentially argued that they do not deserve a bailout even at a time that an unprecedented crisis will deal a severe blow to the European economy and could imperil the future of the entire European project.

"Investors have recently been detecting growing public support for the concept of coronabonds in European Commission and ECB circles," said DZ Bank analyst Daniel Lenz, adding that German ECB Executive Board member Isabel Schnabel was among those who appeared to voice support.

Germany has traditionally opposed the idea of joint debt issuance, being unwilling to...