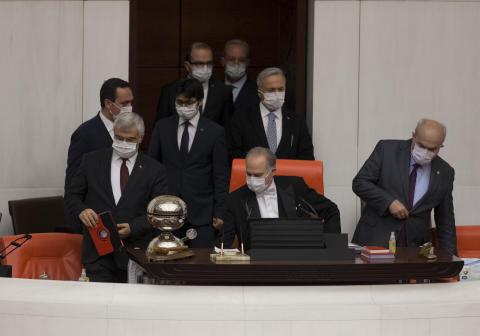 A draft bill seeking to make amendments in criminal execution law that would result in the release of around 90,000 inmates started to be discussed in the parliament.

The ruling Justice and Development Party (AKP) submitted the draft proposal to the Nationalist Movement Party (MHP) about two weeks ago and started deliberations on the matter with the members of two opposition parties, the Republican People's Party (CHP) and the İYİ (Good) Party, last week.

The bill passed the parliament's Justice Commission and the General Assembly convened on April 7 to discuss the new regulations.

"Enforcement is a difficult area to regulate. In this sense, offenses that hurt the public's conscience, [such as] sexual [assault] offenses, narcotic crimes, murder in the first degree, violence against women and terrorism offenses have been left out of the scope," Özkan added.

The bill also oversees regulations regarding the prison's extent, due to the COVID-19 outbreak in the country, according to Özkan.

With the bill, convicts in open prisons will be able to serve their time at house arrest for two months, during the coronavirus pandemic. The Justice Ministry will also be able to extend the house arrests for at most two times.

Asked about how many inmates will be able to benefit from the new regulation, Özkan said that about 90,000 is estimated to serve their time under house arrest.

"Right now, in scope of temporary and permanent enforcement regulations, about 45,000 benefits. With those who will be transferred to homes due to the pandemic, this figure reaches 90,000," he said.