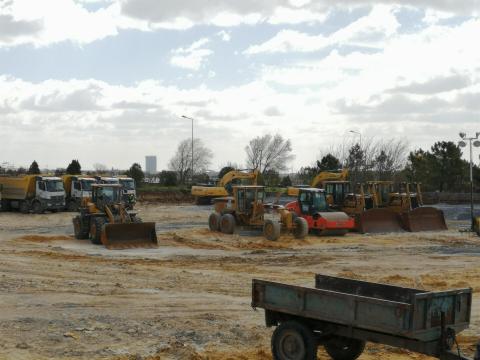 Construction work to build a field hospital at the site of the now-closed Atatürk Airport in Istanbul has begun.

President Recep Tayyip Erdogan announced earlier this week two more hospitals with a capacity of 1,000 beds each will be established in the country's largest city as part of efforts in the fight against the coronavirus outbreak.

One of the field hospitals will be developed in the Sancaktepe district on the Asian side of Istanbul, while the other planned health facility will be established at the site of the Atatürk Airport.

"We will complete them quickly within 45 days and open them to the service of our people," Erdoğan said in a speech he delivered on April 6.

A number of trucks and heavy construction equipment arrived at the construction site yesterday morning and building work began on a land plot belonging to the General Directorate of State Airports authority (DHMİ).

Construction work for the Sancaktepe facility already commenced on April 7, shortly after Erdoğan unveiled the plans for the field hospitals.