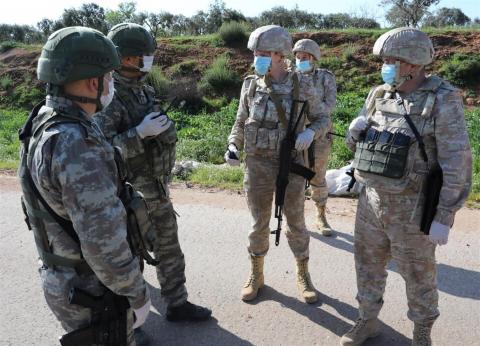 Turkish and Russian troops have conducted their third joint patrolling mission, the Turkish defense minister said on April 8, in line with the March 5 agreement brokered between Ankara and Moscow that brought a temporary cease-fire in Syria's Idlib province.

Speaking during an interview with TRT, the country's public broadcaster, Hulusi Akar said that there had been a few cease-fire violations yet "peace perseveres" and hostilities have been reduced.

The ministry later said in a tweet that the joint patrol was carried out by air and ground vehicles on the M4 motorway in Idlib.

"Regardless, caution is fundamental for us. It is our wish for the cease-fire to become permanent," he added.

Akar said that Turkey's operations continue in operation areas. A total of 903 terrorists have been "neutralized" since the beginning of this year, he added.

"Self-defense is essential. Our friends [in operation areas] do what's necessary," he said.

According to the figures the minister provided, Turkey carried out 59 land, 90 air operations since Jan. 1.

Virus did not spread to army

As for the precautions the Turkish forces take to curb the spread of the coronavirus, Akar said that necessary measures are being taken since day one.

"We are discussing the necessary measures. We are continuing close contact with the Health Ministry and Interior Ministry," he said.

Akar also said that units have been formed at every ranking and they are carrying out momentary works.

"The most important thing is that the virus did not spread to the operation areas. Our friends are showing extraordinary efforts," he said.