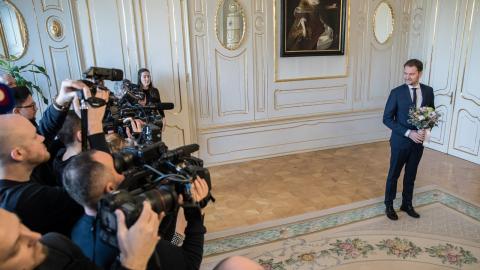 "We need to overcome our prejudices that when a person wears a mask, he must be sick or infected," Puskarova said in the studio on March 13, urging the politicians to be role models for the public.

Krajci put on the mask and cited the Lancet medical journal. If everybody wore one, he said, it would have the same protective effect as a vaccination.

In the coming days, millions of Slovaks who had never worn masks in their lives started donning them in public.

Many Slovak politicians make it a hobby to blame mainstream journalists for all manner of mischief. But as disinformation about the pandemic swirls on social media, traditional news outlets are winning plaudits for keeping the public informed in a calm and measured way.

"We saw what was happening around us," Henrich Krejca, editor-in-chief of TV Markiza's news department, told BIRN.

Noting that the broadcaster had been quick to adopt its own strict safety measures in the face of the coronavirus threat, he said the station was adamant about leading by example.

"And so it happened that our anchor, Zlatica Puskarova, became the first person in the Slovak media who put on a mask and asked the politicians to do so too, during a special live broadcast."

The next day, on March 14, outgoing Prime Minister Peter Pellegrini and Interior Minister Denisa Sakova put on masks during a press conference at a restricted crossing on the Slovak-Austrian border — and all the other officials present followed suit.

"We have to help each other now: sew some masks, use any sort of face protection, to stop the spread of a droplet infection," Pellegrini told...