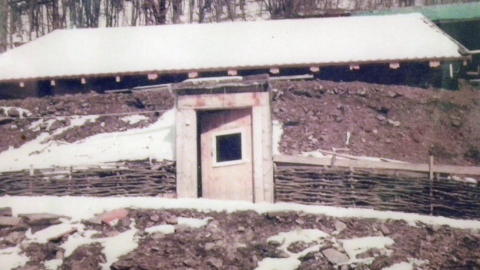 "It all happened in one place - life and death. That is how things looked in those days."

'We felt the full intensity of the shelling'

The wartime staff of the hospital. Photo: Radio Olovo.

Hostilities erupted in Olovo when it came under attack from the Bosnian Serb Army in August 1992, while the town was defended by the Bosniak-led Bosnian Army. Local medics had to deal for the first time in their lives with injuries caused by artillery fire, recalled nurse Mevlida Kulic.

"Five people were injured, three of them severely, and one child was killed [in the first attack on the town]. For us, it was horrible," Kulic said.

Olovo's former medical chief Mujo Hodzic said that because of the intensive shelling, it was no longer safe to work in the town's health centre - even in the basement.

"We felt the full intensity of the shelling, because the health centre was a very striking target, it was big and white and easily visible from the positions from which tank and howitzer shells came. So the whole front side of the health centre was destroyed and literally turned into a big pile of rubble," Hodzic said.

It was then decided to relocate the health centre to somewhere outside the range of artillery fire. Hodzic was one of the people involved in finding an appropriate location at Paska Luka, one-and-a-half kilometres away from Olovo on the road to Zavidovici.

Internal medicine specialist Izudin Kucanovic, the current director of the health centre, said patients and medical staff were relocated to the new, semi-underground clinic on the night of May 3, 1993.

"The facility was practically below ground. It was made by digging and creating a wooden construction, which was covered with some earth,"...