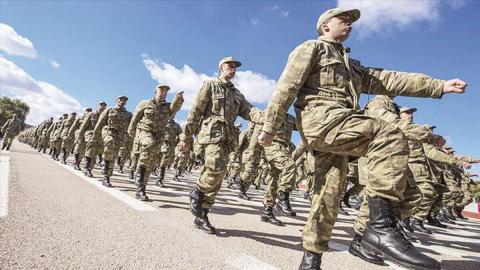 Turkey's Defense Ministry is mulling temporarily halting the conscription and the discharge of soldiers, while assessing an alternative that will allow distance training for paid military service, due to the novel coronavirus outbreak, according to local media reports.

A decision on the ministry's proposal will be discussed during April 13's cabinet meeting.

As part of measures taken to curb the spread of COVID-19, Turkish Defense Ministry is evaluating options for mandatory and paid military services.

Daily Hürriyet reported on April 11 that the ministry is mulling temporarily suspending the soldiers' conscription and discharge. According to the ministry's sources, cited by Hürriyet, works are being carried out for male citizens who will benefit from paid military service, to do their duty via distance training, instead of staying at military posts.

The Turkish Armed Forces (TSK) carried out the latest discharge of soldiers on April 1 while the most recent conscriptions were conducted on March 19.

While 60,000 soldiers were discharged during this period, another 60,000 were conscripted.

Upon the outbreak of the coronavirus, the soldiers who are to be discharged from the TSK are being quarantined 14 days before their disband. As for newly conscripted soldiers, they were being put under observation for 14 days before they were sent to their corresponding military posts.

As the recent assessments by the TSK revealed a possible mobility due to the conscription and discharge of 120,000 soldiers, concerns of spread risk emerged.

The decision to temporarily suspend conscriptions and discharges are expected to come into effect after it obtains approval from President Recep Tayyip Erdoğan.