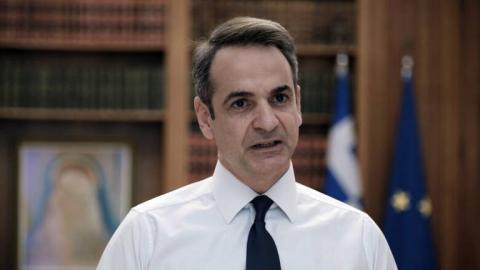 The coronavirus epidemic is subsiding, but the war is not won yet, Prime Minister Kyriakos Mitsotakis said in a televised message this evening, thanking the Greek people for their trust and discipline and calling on them to continue to respect restrictive measures.

The PM warned that loss of life would have been much greater if the government had adopted any other policy and that he will continue to fiollow the advice of medical and other specialists so as to ensure a gradual return to normalcy.

«Above all, we will continue for a long time to protect older people and all those suffering from serious and chronic illnesses,» he said.

Assistance for unemployed, including long-term cases

Mitsotakis said that from the very start the government took measures to support incomes and has earmarked over 14 billion euros to support workers and businesses.

The government is expecting 10 billion euros in liquidity from European funding.

«Already, 750,000 workers are collecting the 800-euro stipend. Nearly 200,000 unemployed people were given an extension of their benefits. For more than 500,000 businesses, all tax and insurance obligations have been suspended, while 85,000 scientists have signed up for subsidised online training.

He also announced that 155,000 long-term unemployed people will receive an emergency 400-euro stipend.

Mitsotakis said that the economy will be in recession at least this year due to the pandemic but he projected rather optimistically a strong comeback in 2021.

«The recession will be great, but the recovery could be much greater in 2021.»

He said the governmentr is intent upon ensuring that he burden...