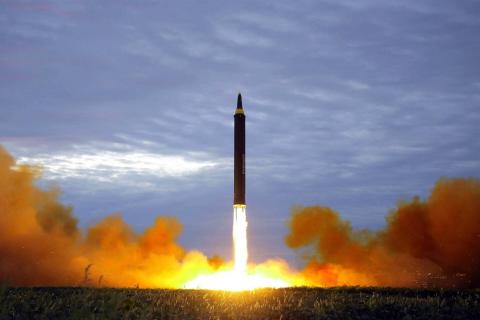 The "multiple projectiles" fired from Munchon in the east of the country were believed to be "short-range cruise missiles," the Joint Chiefs of Staff said in a statement.

The test comes a day before the nuclear-armed North marks the 108th anniversary of the birth of its founder Kim Il Sung, grandfather of the current leader Kim Jong Un.

It also comes a day before the South holds parliamentary elections, and at a time when the world's attention has been largely focussed on the coronavirus pandemic, which Pyongyang insists it has so far escaped.

The North has repeatedly tested ballistic missiles in recent years, which climb high above the Earth, often into space, before being brought down towards their targets at high speed by the force of gravity.

Its arsenal includes ICBMs (intercontinental ballistic missiles) that are capable of reaching the whole of the U.S.mainland.

In contrast cruise missiles travel at low altitudes -- sometimes just a few meters above the surface, making them hard to detect -- and are powered throughout their flight.

Sometimes highly manoeuvrable, they need sophisticated guidance systems to bring them to their targets.

Tuesday's missiles travelled over the Sea of Japan, also known as the East Sea, before coming down in the water, the JCS said.

The North is subject to multiple U.N. Security Council sanctions over its banned weapons programmes.

It has carried out a series of weapons tests in recent months, often describing...