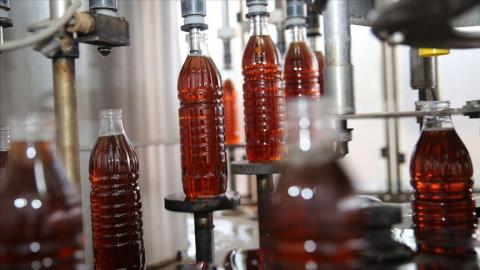 Grape vinegar, produced without using chemical additives by storing them in warehouses carved from rocks in the tourist hotspot Cappadocia, is in high demand amid the coronavirus pandemic.

The grapes grown in the vineyards in the region are first pressed and then turned into stum.

The stum is placed in rock-carved cellars with sawdust that contains vinegar bacteria produced from hornbeam wood in the autumn season.

The liquid, which will become vinegar after fermentation, is taken into storage tanks.

The vinegar obtained by traditional methods is bottled and packaged after weeks of phases.

In order not to compromise on naturalness, vinegar, which has no chemical additives, is preferred due to its richness in flavor and aroma.

Mehmet Armağan, the owner of the facility, stated that there has been high demand after the coronavirus epidemic for vinegar, which can also be used as a natural disinfectant, and they were trying to keep up with the orders.

He said they had not produced in the first quarter of the year in previous years during winter due to the lack of demand. But after the coronavirus emerged and arrived in Turkey, they began producing 500,000 liters of vinegar in the first three months of this year.

Wine has been produced in the Cappadocia region, famous for its fairy chimneys, for nearly 2,000 years.

Wines used to be kept in cellars where vinegar bottles are kept nowadays. Wine firms are still operating in the region, with their cellars having opened space for the vinegar bottles.