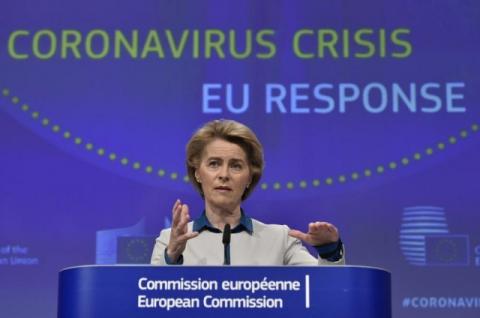 In her address to the EP, she called for the urgent establishment of a "Marshall Plan for Europe", primarily through the EU budget.
In her speech on the EU response to the COVID-19 pandemic, Ursula von der Leyen before the European Parliament expressed her condolences for the "tens of thousands of victims" of coronavirus in Europe.
She also said that in the beginning of the coronavirus pandemic, the EU did not provide timely assistance to the hardest hit Italy at the time of need.
"For many Italians that won't be good enough. The EU wasn't there for them in their hour of need. Many won't forget that."
Italy has suffered over 21.000 coronavirus-related deaths and witnessed a total of 165.155 cases of infection since the outbreak reached its borders, according to the latest statistics.
"Yes it is true that no one was really ready for this. It is also true that too many were not there on time when Italy needed a helping hand at the very beginning," she said. "For that, it is right that Europe as a whole offers a heartfelt apology", von der Leyen said. Noting many examples of European cooperation from recent weeks, von der Leyen estimated that "Europe has now become the world's beating heart of solidarity".
"It's time to put aside the old divisions, disputes and accusations. It is time to get ready for the new world and use all our shared strength and spirit for a common goal", von der Leyen said.
The President of the European Commission says that Europe must begin to strengthen the sustainability and resilience of society, the economy and lifestyle.
Emphasizing that Europe needs massive investments to start its economy, Ursula von don der Leyen reiterates that the so-called "Marshall Plan" for Europe's recovery must be...