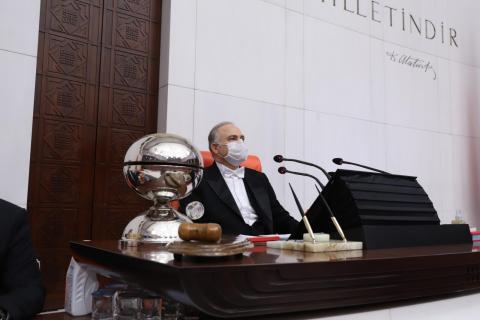 The Turkish Parliament is going on recess until early June after a number of key bills in the fight against the pandemic has been approved, with expectations that it will resume its works on June 2 after Eid el-Fitr.

Lawmakers adopted the last omnibus bill devoted to cure the pandemic impacts on the economy at 4 a.m. on April 16 following an intense legislative performance in the last four weeks.

Along with laws contributing to the government's efforts to curb the spread of the virus, the lawmakers have also voted in favor of a bill releasing around 90,000 inmates from prisons. In a rare move, five political parties agreed on a law for the protection of the health personnel by increasing the sentences of those who commit violent acts against the medical staff.

Parliament will convene in a special ceremony on April 23 to mark the 100th anniversary of the establishment of the Turkish Parliament. It has already canceled all the events for the celebration of the centennial except for the special session to be held at the General Assembly.

The leaders of the political parties are expected to address parliament on that day following social distancing rules.

The main opposition Republican People's Party (CHP) has slammed the ruling party for suspending the parliamentary works at a moment when the country is fighting the pandemic.

"Why parliament, which remained open even during the War of Independence, is now going to recess? This is not right," CHP leader Kemal Kılıçdaroğlu CHP has told the T24 news website in an online interview.