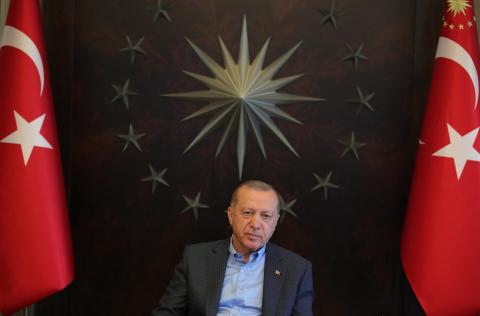 "This pandemic, which is basically a health problem, has become the biggest crisis after World War II in terms of its economic results," Erdoğan said, speaking to his party's Central Execution Board meeting via teleconference.

Especially the "desperation" of the developed countries in the face of such a comprehensive crisis necessitates reconstruction of all future predictions, he stated.

It was not possible for Turkey to stay out of the pandemic given the situation in all European countries and Iran was severe.

"However, our difference from other countries is that we both have a strong health infrastructure and take the necessary precautions over time," he said.

The state of the COVID-19 outbreak in Turkey started to display a horizontal trend, he added.

"We aim to ensure the highest level of compliance with the measures throughout the month of Ramadan, and hopefully, the transition of our country to normal life after the feast," Erdoğan stated.

It is important to be prepared for new situations that will emerge in the post-pandemic world in the region and in Turkey, as well as to combat the outbreak, he said.

"In our cabinet meeting yesterday, we made all necessary warnings and instructions to all our ministers. Turkey, for the first time since the Second World War, has gained the opportunity to take part in the center of a restructuring process at the global level. The way to take advantage of this opportunity is already making our intellectual and physical preparations," he added.

He called on the party members to make analyses for Turkey and the...